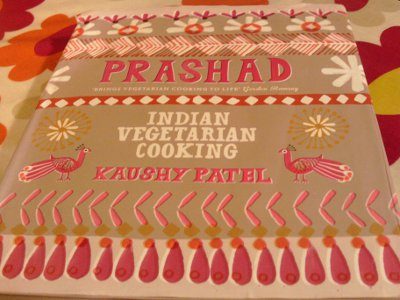 We’ve tried out nearly 20 recipes from Prashad: Indian Vegetarian Cooking by Kaushy Patel, and it gave us lots of inspiration when we were planning an Indian pop up night.

Listed below are all the recipes we’ve made from the book, with notes and a star rating from 1-5. As you can see from the number of recipes made, I really liked this book, more about that at the end.

The book is vegetarian (milk, yogurt and butter used, but no eggs), where there was dairy, it was replaced with vegan ingredients. This was mostly successful, but as you’ll see from the notes below, not always.

Chapatti balls pg 50 *****
Amazing flavour. The recipe suggested frying them, with baking as an alternative. They were slightly dry when baked but still fantastic. I also tried the filling with the potato covering from page 52 and it worked really well (one recipe of the potato filling covered 14-16 balls).

The filling was so good that we adapted the flavours into a Spicy Pea, Leek and Coriander Tart which we offer on our menu.

Garlic-coconut filled potato balls pg 52 ***
Needed more potato and too dry. I did not have fresh coconut or the correct sev which might explain this, so it’s probably not the fault of the recipe.

Chickpea pancake rolls pg 70 *
The recipe warned that you might need to practice these a few times to get them right. I tried once and made such a mess that I was not motivated enough to try them again. Lots of skill required and the book couldn’t adequately teach this.

Potato and cauliflower stuffed flatbread pg 94 *****
Very nice, an extra-special flatbread to go with a meal.

Tamarind, tomato and potato curry pg 113 *****
Tasty sweet and sour curry. Liquid needed adjusting slightly, there was too much.

Corn-on-the-cob curry pg 121 *****
Brilliant. Frozen corn on the cob was listed in the recipe and it didn’t sound too promising, but it worked well and was really tasty. It was fun to eat the curry with the big chunks of corn on the cob in it.

Spinach and mushroom curry pg 135 *****
Delicious with a delicate flavour. Loaded with spinach which was great.

Spicy tomato and cheese pg 142 *****
Excellent – star recipe of the book so far. I added in some extra vegetables, used Bute Island non-melty cheddar sheese and adapted the method. The flavours are best if you leave it to stand for at least an hour before re-heating and eating. It was/is fabulous. We have introduced this dish to our menu and it is our most popular new coming dish of 2015. We are going to share the recipe in a week or so, keep an eye out.

Yogurt and mint dip 211 *****
Really good. This has Colmans mint sauce in it, a surprisingly good addition.

I love this recipe book. Although I didn’t get success every time, I found so many amazing recipes in this book that it gets top marks. Apart from the fact that it’s not all vegan, of course. The recipes are clearly explained and reasonably easy to follow (except the chickpea pancake rolls). Most of the ingredients are fairly easy to get hold of, though it’s no surprise that you’ll need a decent range of spices.

We don’t recommend this book because it is not vegan, but if you have it already the pointers above should be useful. If you want a vegan Indian recipe book, Vegan Richa’s Indian Kitchen came out this year and has received rave reviews. She also shares many recipes on her Vegan Richa’s blog.