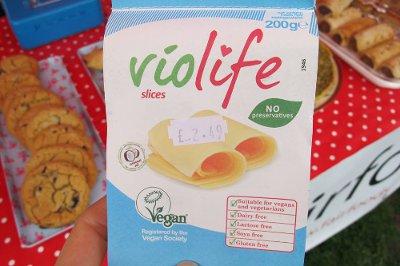 Here is a run down of the vegan cheeses we use (and a couple that we don’t use) at Fairfoods.

In cheesecakes, our favourite vegan cream cheese is Tofutti Creamy Smooth Original for the incredible taste and the texture it gives to cheesecakes. We use it in our passion fruit cheesecake and chocolate caramel cheesecake.

Creamy Cheddar Sheese is overpowering in cherry tomatoes, not recommended.

We used VBites’ Cheezly for the first couple of years of Fairfoods, but started to find that the taste wasn’t as good, and also it didn’t keep as well. So we stopped using it. Note that we haven’t tried it for a few years and the chances are it’s changed since then so don’t let that put you off giving it a try.

Sheese Smoked Cheddar Style, melty is the main hard cheese that we use now. We use it in pizza, homity pie, cheesy lentil slice and quiches and it works well in all of these. It is a flavoursome cheese which is similar in taste to dairy cheese in cooking. It is not over-smoky, the smoke flavour just enhances the overall flavour. It’s also good grated in sandwiches.

When making our vegan pea and paneer curry we use Sheese Cheddar Style or Sheese Hickory Smoke Cheddar, because it’s non-melty and we want the cheese to stay in chunks. It does melt eventually if you boil it for a length of time, but is fine in this curry.

In our burgers, we use Violife Original or Cheddar Slices. A slice melts perfectly if you leave it on the burger for a couple minutes while it is cooking. The slices don’t melt too much, just flop nicely at the edges.

We’ve also tried Violife in sandwiches and cooking, but in both instances found that it doesn’t have a strong enough flavour. The slices are great to eat on their own though, if you fancy a treat.

We love Vegusto, it’s one of the best vegan cheeses available. Unfortunately the price is too prohibitive for us to use in catering, and we’re very happy with the cheeses we do use. Also it contains nuts which we prefer to avoid if possible because of allergies.

(Having said that about nuts, we do use them and in some dishes there is no other substitute.)

Which are your favourite vegan cheeses for cooking, sandwiches and pizza?